Directly contact organizations to find out about changes to services or hours.

The CDC NPIN Featured Partner resource offers HIV/AIDS, viral hepatitis, STD, and TB prevention-focused organizations a platform to showcase their services, programs, and materials. Our goal is to highlight the work of CDC's prevention partners and encourage partners to connect with each other to share information and strategies. Organizations are nominated by CDC or their peers, or are self-nominated. Those selected are featured on the NPIN Web site for the month.

From the start of the AIDS epidemic 30 years ago, HHC has been a leader in HIV/AIDS treatment and care. In 1981, before HIV or AIDS had been identified, Bellevue Hospital reported one of the first of the three cases of unexplained immunodeficiency in the United States. By the mid-1980s, HHC hospitals were seeing growing numbers of patients with AIDS and started developing treatment plans and services, including

HHC has also participated in important research over the years, such as studies of HIV infection in women at HHC's Kings County Hospital in 1986, which led to the development of the country's first guidelines for care of HIV-infected women. 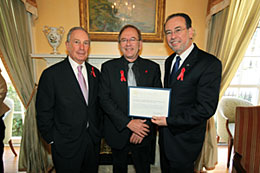 HHC has been in the forefront of incorporating HIV screening into routine medical care. They began offering routine testing through the HIV Testing and Expansion Initiative (HTEI) in mid-2005. Five years later, in 2010, the New York State law was amended to require healthcare providers to offer patients a voluntary HIV test, with limited exceptions.

From mid-2005 to September 2011, the testing initiative has tested one million adolescent and adult patients, diagnosed 10,600 HIV-positive individuals, and linked and retained thousands in HIV primary care; improving their health and the health of the community. More than 90 percent of patients diagnosed with HIV at HHC facilities are linked to life-saving HIV medical care and treatment within 90 days of being diagnosed.